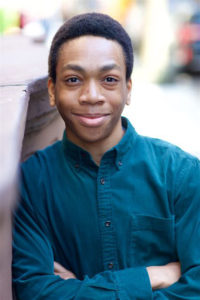 This week our Senior Spotlight is on Nyles Lattimore.

Nyles is a member of The Studio @ Shuffles, our pre-professional, audition-only, musical theater company for students 14-19. Since graduating from LaGuardia High School for the Performing Arts last June, Nyles has been working hard to further develop his performance skills. “ I took this gap year to acquire more and better options for the college arts programs to which I was applying. This year at Shuffles has been absolutely phenomenal. I am learning so much, and growing so much as a performer.”

In the fall, Nyles will be attending the American Musical And Dramatic Academy located right here in New York City, as a musical theater major. A native of Kew Gardens, Queens, Nyles has been singing since the fourth grade. “When I was younger, I wasn’t aware of opportunities like Shuffles; to finally be a part of a school and studio is just amazing to me. Shuffles is a place where all of the teachers and mentors are passionate and encourage ever single student – I really appreciate that kind of magical setting to study the arts.”

Nyles told us that one of his favorite moments at Shuffles was also one of his most difficult. Training as a new dancer, he says that he wasn’t very good at first and was afraid of choreography as a whole. “I came into Studio Rehearsal after having just had a root canal procedure earlier that day. My face was swollen, my tooth was aching, and then they hit us with the choreography. I thought – yikes, I’m done!”

But he said that his teachers Molly and Cyndi came over and helped him get a certain step and told him “you can do this”. Although they were unaware of the physical pain he was in, Nyles said their simple advice was important in that challenging moment. “I was really able to appreciate how much these people cared and wanted me to succeed. Everyone in that room was supportive and helpful and worked hard to make sure we were all on the same page by the end of class.”

A few fun facts about Nyles: he loves to cook and bake and he is afraid of heights. He would one day like to perform at the White House and cites Michael Bennet and Rosie Perez as two of his dance inspirations. He said in terms of the craft of performing and artistic strength his celebrity crush is Viola Davis. His favorite musical performances is Ben Vereen singing “Glory Glory” from “Pippin” but his dream role hasn’t been created yet. “I want to be a male muse in Disney’s “Hercules”. The harmonies that the muses have are incredibly soulful.”

He said his favorite place in New York City is the Performing Arts Library at Lincoln Center and he feels so fortunate to live in the most culturally and artistically diverse city in the world. “Growing up and hearing about Broadway, watching the bucket drummers on the trains, and then seeing shows at the Met has allowed me to dream big!…NYC is like hitting the jackpot in terms arts education. There is opportunity for artistic growth everywhere in this city, which is a blessing.”

Nyles said he is happiest waiting in the wings to go on stage and that in addition to singing and acting, his future will definitely include dance, especially tap. He said if he had any advice for his high school freshman self it would be to train harder. “You just have to go do it – give it all your effort. As busy as I already was at LaGuardia, I would tell my younger self to audition for Shuffles sooner. Working with Gail and Shelby, performing in Peter Pantomime, and just being at Shuffles as a whole has inspired me – I’ll definitely keep training in tap.”