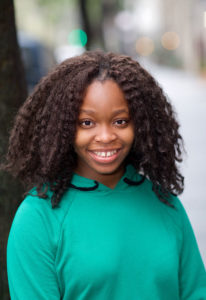 Nicole is 18 years old and lives in Rockaway Queens. She has been performing since she was five years old and took her first dance class when she was six. “When I younger, I never really took my dance classes seriously, I just did them for fun. I didn’t realize that I could actually train my instrument to dance and sing and act at the same time, and that I could do it for a living, a possibility I never saw imaginable.”

She said that coming to Shuffles really changed things for her. “The Shuffles family opened their arms to me three years ago…it feels like it was just yesterday that I auditioned for Studio.” Nicole said she didn’t think there was any way she would get into such a professional and challenging program. “Gail, Buddy, Cyndi and Chris took a chance with me and I will be forever grateful. They saw an ability in me that I couldn’t yet see in myself…a space to grow and develop as an artist.” She said it has made her a much more well-rounded performer.

Nicole attends The Beacon School in Manhattan’s Hell’s Kitchen neighborhood, an application-based public school with a rigorous, individualized college prep curriculum. In the fall, she will be attending Ithaca College as an Acting BFA major. She said that her future will definitely include dance, and she is grateful for the intensity of her classes at Shuffles which has prepared her for whatever lies ahead. “I’m no longer afraid to grab it! “

She said it has been challenging balancing her school work, her Shuffles classes and her other activities, in large part because she lives so far from the West Side, but she feels it has helped her become a more mature and organized student. “It has prepared me for the rigor of college. The hard work was tedious in the beginning but it will definitely pay off.”

Her favorite Shuffles memory occurred last year while practicing for a Shuffles Studio performance. “The choreography required me to actually stand on top of my fellow studio members. It was a lighthearted, silly scene and it forced me to trust the people around me. When I would climb over them, I knew they had me, that they would never let me fall….I saw it as a metaphor – just like a family, I knew they would always have my back.”

In addition to performing, Nicole is also passionate about writing and directing. “Playwriting is something I love and work on constantly. I’m very interested in screenwriting; I want to create stories that resonate with people.” Nicole performs in plays at Beacon and she also does some directing in her school’s studio acting classes. She is currently writing and producing a play which will debut in May. Rounding out her many talents she also plays piano and flute, sings in her church’s mass choir and is president of Beacon’s drama department. 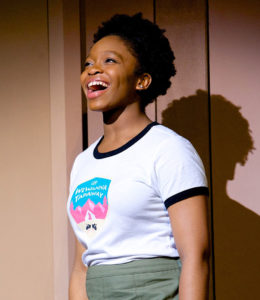 She says her happiest moments are when she’s on stage, but not necessarily front and center under the spotlight. “In-the-moment feelings are so breathtaking to me. That’s the beautiful thing about theatre. It moves in real time and you have to keep up with it… to stand in the wings and witness live theatre and feel the constant energy and movement that drives a scene or a song to the end…it’s so beautiful…that makes me happy EVERY time. “

Nicole is anxious to explore the world, particularly Asia, but back here at home in NYC her favorite place is anywhere near the water because she loves to look back at the skyline of Manhattan.

She said that she is inspired by her Shuffles Theatre Jazz teachers and hopes to grow into a strong theatrical dancer. Her favorite musical is one that she saw Off-Broadway a few years ago entitled “Invisible Thread” and her favorite performance as an actress was performing in “Caroline, or Change”, her first musical. She said her dream role is Timoune in “Once on this Island”.

If she could turn back the clock and give her freshman self any advice it would be to not be afraid. “My fears of not being perfect limited my progress and held me back. Don’t be afraid to fail, don’t be afraid to try something new, you never know how good you will become. Everything takes practice, persistence, and patience. “

We asked Nicole how growing up in NYC has helped her grow as an artist. “I’ve been able to see so many plays and witness Broadway-caliber work.” She said in particular, her time at Shuffles has allowed her to develop a side of her artistry that she never imagined existed inside of her. “My hunger to learn even more of my craft stems from having the privilege of doing it – every single Shuffles teacher helped my confidence, motivated me and challenged me, and I am forever grateful.”