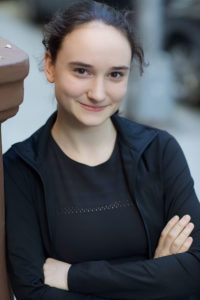 Kate strapped on her first ballet shoes at the age of 4 dancing at the Joffrey Ballet school, but even at that young age, she was begging her mother to try other kinds of dance. Eventually she found Shuffles where she has now studied for eight years. “My first year I was in a beginner tap class with Gail and a musical theater class with Cyndi. One of the recital numbers I was in included some advanced students. Even though they were my age, I remember looking up to them so much – I wanted to move up to their tap class in the fall so I worked really hard to catch up and I made it happen!”

Kate told us that her favorite Shuffles memory will always be working on Peter Pantomime, Shuffles annual holiday show. “I was in Peter Panto four years in a row and loved seeing it evolve over the years. I started as a lost boy, moved on to play John the second year and then did two years in the role of Wendy (with two different Peters). As I grew older and was cast in larger roles, I loved becoming a mentor and leader for the younger students. That performance was always the highlight of my Shuffles year! “

We asked Kate to share a few things that we may not know about her. “I am a very adventurous eater! I love food and will try anything put in front of me.” She also loves antiques and collects all kinds of vintage hats, a fitting hobby for an actress who loves to try on different roles!

A life-long resident of Park Slope, Brooklyn, Kate uses her time wisely on the subway each day to get work done. “Also, if I am in Manhattan and I have a 30 minute break between the end of my school day and a Shuffles class, I usually go to Starbucks and get work done instead of spending those 30 minutes with friends…sometimes you have to make tough choices in order to succeed in your passions!” She told us how much she loves being a native New Yorker. “I can’t imagine growing up anywhere else. I have been able to see amazing theater, get world-class training and meet incredible artists. Being a city kid has also given me a certain confidence and independence. Since I live in Brooklyn but have always taken dance and attended high school in Manhattan, I have had to learn how to be independent and confident. Ask me how to get anywhere on the subway and I can tell you!”

As a drama major at LaGuardia High School for the Performing Arts, Kate told us her dream role is to be in an Arthur Miller or

Tennessee Williams play, two of her favorite playwrights, and she would also love to play Anna in “The King and I” and Reno Sweeney in “Anything Goes”. But her ultimate inspiration is Audrey Hepburn. “I love everything she does! She has such a grace and ease when she performs.

She said she is happiest when she’s onstage with other artists sharing those truthful moments that make the art form so special. “I know I will always have to work on monologues or solo songs but I prefer creating theater with other artists. I believe theater and dance shouldn’t be solely focused on one person or your own successes; it should be about the ensemble. It’s a collaborative effort! “

In addition to standing in the spotlight onstage, Kate has produced several shows at LaGuardia and created and directed two numbers in the all-school talent show Rising Stars. “I love exploring and studying the production/management side of theater.” She also commits time to Concerts in Motion (a non-profit that connects musical youth to older residents) and is a youth leader for the organization visiting residents who are homebound to sing for them. “I love doing it…it gives me a greater purpose with my art! I have actually been connecting some fellow Shuffles students to the organization.”

So what would you tell your freshmen self now that you have the wisdom of four years later? “I would say to not be discouraged when things don’t go as expected. When I first began at LaGuardia I was thrown into a very different environment and it was sometimes difficult to find opportunities to be involved in theater as a freshman. I felt discouraged and lost but I soon learned that if I kept working hard and seeking out opportunities I would eventually find them. I never thought that most of my time at LaGuardia would be spent working on the production side of theater but my passion for theater only grew as I tried new things and said yes to new opportunities.”

A self-described history geek, Kate will be heading to Princeton in the fall to study either history or economics, but performing will still play a role in her college experience as she takes advantage of the University’s programs. “I’m hoping to either pursue a Music Theater Certificate, which is like a minor, or a Dance Certificate as part of my college education. After college I really want to try and pursue a career as an actress.”

Just a few weeks ago she played Violet Weston in her school’s production of “August: Osage County”. She said playing a 65-year old foul-mouthed, drug-addicted matriarch was the hardest thing she’s ever done. “I spent three months preparing and rehearsing and the process was incredibly draining but it was also the most rewarding experience of my life. In the end I managed to portray a woman who was so extremely different from me but who I somehow still connected with. That show solidified once and for all that acting is what I want to do. No matter how difficult, there is nothing like stepping into the shoes of a character and becoming that person in front of an audience.”

Kate goes back to her first musical theater class at Shuffles for continued acting inspiration. “Much of that first class I took with Cyndi went on to become the original Studio at Shuffles…we’ve been a family all these years and with Cyndi and Chris’ guidance , I have grown so much as an actor and performer.”

We look forward to seeing Kate take her final bows as a Shuffles cast member next weekend in “Meet Me At The Plaza” at the Kaye Playhouse.