This week Shuffles’ Senior Spotlight is on Emma Brafman.  A senior at The Birch Wathen Lenox School, Emma, 18, is a lifelong New Yorker and has been dancing at Shuffles for 12 years!  She tell us how grateful she is for what this city has taught her.  “Growing up in New York has forced me to be independent…I’ve walked to school since I was 12 and done all kinds of things here on my own – it makes other places seem less scary and daunting.”  She also shared that growing up in New York gives you access to so many unique experiences such as taking classes with teachers who are Broadway professionals, seeing shows and meeting so many open and expressive people. “I’m going to miss New York – the non-stop energy and how everyone has their own thing going on.  I’m also going to miss Shuffles so much…my friends, the comfort of those conversations…it’s been a safe space for me for so many years…I love coming here and knowing everything about this place and these people.  Working in a new environment next fall will be scary, but also exciting.”

Emma will to be attending Tulane University in the fall and anticipates that her studies may eventually focus on either psychology or communications.  “I also want to continue to dance – after being at Shuffles for so many years, I can’t imagine not performing and at Tulane I don’t need to be a dance major to participate in their shows.  Continuing to do musical theater will help cushion my landing as I transition from high school to college and live in a new place for the first time.” 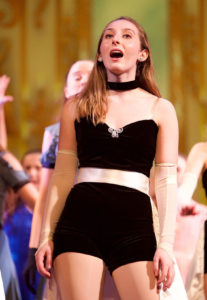 This summer Emma will embark on a month-long tour of Europe, her first summer in many not attending sleep-away camp.

We asked Emma to tell us a few things that she is interested in these days other than school and dance. She said she loves country music and has also been listening to a lot of Jason Robert Brown.  She is also kind of obsessed with the food at Gyu Kaku, a popular Japanese barbecue place on the Upper West Side.  But one of her other really important loves is writing.  Emma is the editor of her school’s magazine called “Range” and is particularly proud of a continued feature called ”The People Around Us”.  “It’s about appreciating all of the interesting people in our lives that we may not think to speak to every day at length…the barista, the cab driver…they all have an interesting story to tell.” 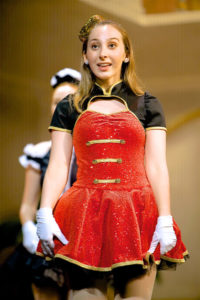 Lastly, we asked Emma to share with us her biggest takeaway from all of her years at Shuffles.  “I would have to say that a turning point for me came when I was cast in the role of “Mother” in Peter Pantomime last year. I had watched Cyndi and the older students play that part for many years.  All of a sudden I realized that I was the older student, the seasoned performer – it made me realize that I had the maturity, experience and ability to do well in that role.  The magic of Shuffles is that they give you the training, and then a structure, an opportunity.  Then they push you to create something in that space – it’s like they say to you, ok, you have the role, now what are you going to do with it?… we trust you to go make something great out of this.”

We have no doubt that Emma will also make something great out of her time at Tulane and all of the performances that lie ahead for her.