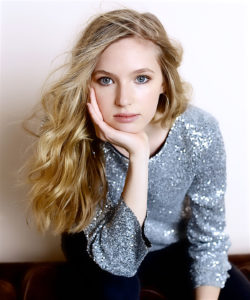 Our Senior Spotlight this week shines on Haley Murphy.

Haley first came to Shuffles when she was eight years old and now ten years later she is thrilled to be one of the oldest students at the studio. “I had always looked up to the older girls at Shuffles, who taught me so much about performance, as well as professionalism and what it means to be a part of a team; I hope I have done the same for the younger students.”

After taking her first baby ballet class at the age of two, Haley went on to perform in the Nutcracker with the New York City Ballet. “Growing up in New York City is such a privilege, especially if you are interested in the performing arts. When i was little, I loved taking ballet class; when I was in the Nutcracker, I was so small, I don’t think I even realized what an extraordinary privilege it was to be on that stage.” Haley said that living here in such an artistic epicenter has afforded her the chance to appear in television shows, commercials, and independent films even while pursuing her rigorous academic schedule.

As she embarks on this challenging and exciting new phase of her life, we asked Haley for some enlightenment on how she balances everything. “I’ve always tried to be ahead of my schoolwork so that when something spontaneously came up (auditions, last minute rehearsals, etc.) I wouldn’t freak out that I couldn’t get everything done. Time management is a big challenge and one of the most important things I’ve learned is to plan as much in advance as possible—and then to be flexible when something causes the plan to change—which is inevitable. I’ve also learned that if you communicate with people about what you are doing or need to do, they tend to be supportive because chances are, they’ve also had to be at two places at once!”

Haley tells us that her main interests are acting and film, both of which were sparked years ago when she took a musical theater class as Shuffles. “That was my introduction to acting and now it’s my dream profession.” She said she would love to play a tap dancer in a film, merging two of her passions. And she also dreams of writing a screenplay or television pilot about life at Shuffles! We know that we would watch!

Haley’s favorite Shuffles memory is from a few years ago when she was rehearsing for Opus. “We were dancing so hard that I tapped the tap off my tap shoe. It slid across the floor when I scuffed and I remember being so into the dance that I didn’t even realize it when it first happened! The most special time at Shuffles is when we are getting close to the recital and have our big group rehearsals where all of the classes get to come together and work and spend time together.”

Haley is inspired by the faculty at Shuffles as well as her friends that dance there. She said 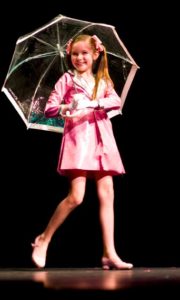 that seeing up close how hard they all work and how talented they are has been enlightening. “My very first tap class was taught by Gail Crutchfield and Katherine Ponza as a part of a Studio Maestro summer intensive. I fell in love with the way Gail and Kat taught tap dancing. They are both such elegant and inspirational dancers.” Haley said after that, she was hooked and immediately signed up for classes at Shuffles that fall.“

She tells us that she is grateful for the level of talent at the studio that has pushed her to be her best. “Throughout my years at Shuffles, I have been taught by current and former Broadway/professional dancers. Haley said that being a member of The Company @ Shuffles, it’s pre-professional program, has also helped her to grow as a dancer and performer. “The Company is taught by the very talented Shelby Kaufman and Phillip Attmore; we are so lucky to be learning from this Shuffles faculty!”

After graduating from The Spence School next month, Haley will be attending New York University’s Tisch School of the Arts as a Cinema Studies major. “I am very excited to be going to school in New York because it means I can still be a Shuffles kid, sort of……next year I hope to take my Shuffles teachers’ open classes and pop into Studio Maestro when I’m in the neighborhood.” Don’t be a stranger, Haley! Once a Shuffles kid, always a Shuffles kid!