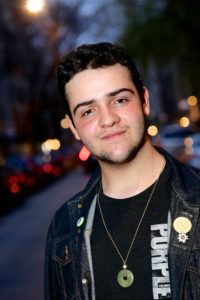 Elijah is 17 years old and in lives in the Bronx. Unlike some of our other seniors who have been with us for quite a while, Elijah just joined Shuffles in the past year. He is now a member of Shuffles’ pre-professional musical theater group, Studio@Shuffles and he also takes Jazz with us.

Elijah is a senior vocal major at the Special Music School located at the Kaufman Music Center on Manhattan’s Upper West Side. It is an audition-based New York City public school for gifted students who wish to study music. He is still deciding upon which college to attend in the fall, but he is certain that he will be studying theater as a major.

He said his first dance inspiration was his grandmother, Dorine, who also instilled in him a passion for gardening. “No matter how big or small the scale is, I like taking care of growing things.”

Elijah is very active in community theater as well at Riverdale Rising Stars in upper Manhattan. He won two National Youth Arts Awards for best supporting actor in a musical for his portrayal of Eddie Flagrante in Zombie Prom and for lead actor in a musical for the iconic role of Jean Valjean in Les Miserables. We asked him about finding his passion for performing: “My happiest moments are when I’m surrounded by people with similar passions. There’s nothing more motivating than finding other artists as driven as you are by something you love.”

Elijah said the first Broadway show he saw was “Spiderman, Turn Off the Dark”. “I can’t believe I’m saying this, but I really wasn’t into live theater then. After that, I was hooked”. He said his favorite performance onstage was Cynthia Erivo as Celie in “The Color Purple”. “She was absolutely magical!” It’s no surprise then that she is also his celebrity crush. “You gotta love that girl,” he said. He said his dream role would be playing Helena in “A Midsummer Nights Dream”. “It’s unconventional but I love the character. “

Elijah’s favorite place in NYC is Lincoln Center. “Not only does it hold my school, it’s also a musical epicenter. I’ve been so spoiled with amazing artists all around me; I can’t imagine myself being half as informed and cultured as an artist if I hadn’t grow up here.”

We asked him what are a few things that people would be surprised to know about him. “A few years ago I learned to read Tarot Cards and I love doing that for people. I am also very afraid of skunks!” Elijah also loves books, especially reading on the train to and from school and watching classic movies. But he shared that his first love will always be musical theater. “I think it includes so many amazing things that I love… acting, singing and dancing…all in this lovely little package.”

We asked Elijah if he had any words of wisdom that he follows. “When I was only 8 years old my mom told me that it doesn’t make your day any harder to be nicer to someone. Even though I was so young at that time, and she probably doesn’t even remember it, it left an impact on me.” So what would you tell your high school freshman self if you could, we asked. “Just enjoy the ride and everything will fall into place. Trust your instincts and don’t forget to listen to other people. Believe it or not, they know stuff you don’t.”

And lastly, we wanted to know what impact being such an active member of the Shuffles community has had on Elijah. “Shuffles has given me a lot of the things I was lacking; before coming here, I never really danced except at the occasional family celebration.” He told us that his first role and favorite Shuffles memory will always be playing Archie in the musical “13”. “I have studied voice but the musical theater intensive of doing that whole production in a week and learning all of the songs and the choreography was just an amazing experience! Dance is such a universal, worldly, beloved thing…now I can’t imagine my future without it. “