Molly Jobe is a former SHUFFLES student who is currently on her second Broadway show Waitress. She is one of the swings and covers the lead role of Jenna. We were able to sit down and ask her a few questions about her childhood and what it is like to cover such a large role. 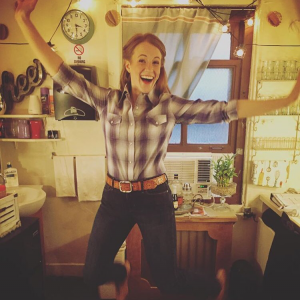 Can you speak a little about your childhood and what got you into musical theatre and dance?

I am the youngest of three children from Columbus, Ohio. Growing up, my older siblings were always listening to musical soundtracks and dancing around our living room so I naturally followed suit. When I was 4 years old, we came to New York to visit some family friends and were immediately hooked on the energy of the city. My parents took my older siblings to meet with an agent to see what it was like to be a professional actor. It was simply for fun but then the agent fell in love with them, submitted them for a new Broadway musical, which they ended up booking. So, we moved to NY and the crazy Jobe family adventure began. I was addicted to musicals from that point on. It was what I was going to do with my life forever. I never questioned it.

What was the biggest adjustment coming from Ohio?

I moved to New York at such a young age that I think the transition was much more seamless than it would’ve been had I moved here as an adult. The energy of New York is not for everyone. It’s fast, ruthless, and unforgiving at times. Growing up here, I was able to find my own pace, which I really benefitted from when I graduated from college into “the real world”. I felt like I had a leg up on those who were coming to NY from conservatory programs outside of the city. It’s a tricky city to navigate and there’s definitely an adjustment period that I got to skip.

How many years were you a student at SHUFFLES?

I think I started taking classes full time at SHUFFLES when I was 11 and I continued through my senior year of high school so, 7 years?

Do you have a favorite memory from your time at SHUFFLES? If so, what was it?

I think my favorite thing about my time at SHUFFLES was meeting the girls in my class. Lucy, Amanda, and Madison were in my class all 8 years and we were all really close. It is a special experience to be able to grow up in a creative environment, spending time learning and growing together. Every memory I have from SHUFFLES has them in it. I am so grateful to have had their friendship as a constant source of joy and inspiration during my formative years. I also cherish the time I was able to spend with Gail and the other SHUFFLES teachers. They were always the perfect balance between encouraging and challenging.

Can you tell us about your time between SHUFFLES to Waitress? Where did you go? What did you do?

After graduating from SHUFFLES and LaGuardia Arts High School, I went to NYU’s Tisch School of the Arts. I graduated from the New Studio on Broadway at Tisch in 2013 and shortly thereafter joined the Broadway company of Disney’s Newsies! I spent seven months in the Broadway company before going out on the Newsies 1st National Tour for several months. Touring was a crazy, wild experience I will never forget. I saw so many cool places, so many awful places, and learned firsthand what it’s really like to live out of a suitcase. After finishing my time on tour, I spent a couple of months auditioning for various projects before landing in Waitress.

Where were you when you got the call originally to join Waitress?
I was in my apartment when I got the call that I would be joining the cast of Waitress! A call like that never gets old. It’s always equal parts surreal and exciting. Shortly after opening they decided they needed more female coverage so I cover 4 ensemble tracks and 2 principal tracks, including the lead role of Jenna.
What is it like being a swing?
Being a swing is extremely difficult. It definitely takes a special person with a special brain to do it. You have to be extremely disciplined with yourself and make sure that you’re organized and keeping all of the tracks fresh in your brain. It took me several weeks to have all of the tracks down and now it’s a piece of cake. Though there are some times when I’m onstage when I have to think “Oh my god, who am I playing tonight?!”

For more information on what a “Swing” is, TDF (Theatre Development Fund) made a short video to explain. The video can be found here.

What has been your favorite part of Waitress so far? 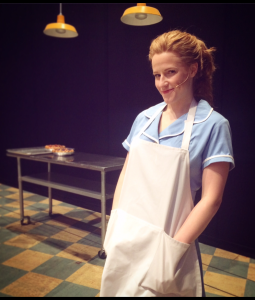 My favorite part of Waitress so far has been the people I’ve met. Every time you do a show, it’s like joining a new family and Waitress is no exception. The cast and crew of Waitress are so special and we have so much fun playing with each other every night. I truly look forward to coming to work every day. I also love getting to sing/listen to Sara Bareilles’ music every night. She has always been one of my favorite artists and she has a real knack for writing for musical theater. Given that she’s now joining the show as Jenna, it has also been such a joy to get to work with her and witness her process firsthand. She’s going to blow everyone away.

What do you hope the audience takes away from the show?
I hope that the audience comes to our show and finds a sense of empowerment. Jenna’s story is one of courage and strength. Strength that she finds both within and from the other two women in her life. She has the courage to imagine a better life for herself and the strength to bring it to fruition, which I find to be a very inspiring story. I hope that it inspires others to dream and make the change they wish to see in their own lives.

If you could instill one piece of advice to a current SHUFFLES student, what would it be?
Listen to your teachers, always be professional, and be nice to everyone you meet. That’s three things but they’re all very important!